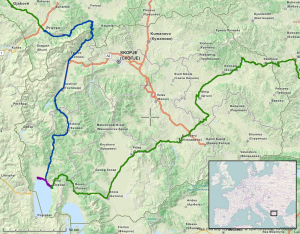 Over the border from Kosovo and its our first chance to use our green cards, saving us a reported €50 each. Ohrid (Охрид) in the south-west corner of the country, is our destination.

The roads are the best since we left Hungary and traffic is reasonably light. Macedonia managing to peacefully breakaway from Yugoslavia early on, has few war scars.

We left Kosovo using the mountain road and head to Tetobo on the back road. Tetobo is busy and pretty damn hot, we missed the bypass and end up riding through the city. The highway from Tetobo to Ohrid is fast and pretty straight with little of interest along the route.

Stopping off in a petrol station to refuel on coffee and for Rory to adjust his clothing for the heat, our foreign currency is readily accepted. Our route runs roughly parallel to the border with Albania 20-30km away, and the guy working in the petrol station appears to have the TV set to an Albanian channel. I understand that parts of Macedonia have large ethnic Albanian populations.

The ancient city of Ohrid is Macedonia’s most famed relic and UNESCO site, and shares its lake with Albania a short distance away. The city is a mecca for tourism which has resulted in an abundance of amenities for visitors.

Dotted throughout the large old town area are numerous Orthodox churches, small alleyways, an ampitheatre and many other old buildings. Outside of the old town are the communist era low-rise tower blocks, where we are staying. Although the streets of the old town are technically open to traffic, navigation is hard and riding even harder along shiny cobbles of a steep inclination.

Famed for the local trout from the lake, so popular and polluted that the fish is endangered, we resist the offering. After some salad we climb one of the hills of the old-town in the heat, to see the old roman ampitheatre – which still appears to be in active use for entertainment purposes.

We are 1½ weeks into our 3 week trip around the Balkans, starting in Budapest and ending in Budapest. So far we have been heading in a southerly direction, it is time to turn around.

West would take us in to Albania and then journey back up the Adriatic coast. East takes us into Bulgaria and on to Romania.

After a day off the bikes in Ohrid, we ride east. Straight across Macedonia, through the mostly flat central plains of the country and up into the mountains which line the border with Bulgaria.

There are a few towns on our route across the country, inbetween these towns there is nothing. The roads are usually wide with an overtaking lane down the centre, yet it still takes us all day to traverse the country crusing along at 110km/h.

The emptiness of the country is shocking, coming from Ireland where there are people living practically everywhere. With the exception of bogland, it is hard to travel more than a couple of kilometres without seeing peoples homes in Ireland.

Through Macedonia we would frequently be travelling for 30km without seeing anything but the road. Our petrol guages required careful monitoring as the only refueling opportunities were in the few towns we passed.

Eventually we reach the mountains in the east and the border crossing into Bulgaria and back into the EU. At the exit crossing from Macedonia we are asked for our green card – no other exit border demanded this. I suspect the guard was getting ready to issue a fine.

We return to the European Union and lose an hour as we cross into another timezone.