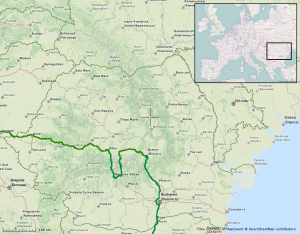 Crossing over one of Europe’s great rivers, the Danube, we enter into Romania just south of Bucharest. The Danube runs along the border between Bulgaria and Romania, and we will revisit this river further upstream when we return to Budapest.

Soon we are on to a dual carridgeway headed for Bucharest. Recommendations from Romanians before our trip advised to stay away from the Capital. Our plan was to bypass the city and head for Brașov up in the mountains of Transylvania.

Bucharest like most large cities in Europe has a ring road, although this one is just a single carrigeway in either direction. Hoping for a motorway, we are instead held up with the rest of the traffic slowly navigating their way around the city. Stray dogs and street sellers mingle in the traffic, one guy attempts to sell me a Nokia smart phone (a difficult sell at the best of times). The weather was hot and dusty.

Clear of the Capital, the roads becoming wider and calmer as we head to the mountains. It feels as if we have culturally shifted to the west, as we pass by McDonalds restaurants on the side of the road – the first since leaving Hungary at the start of the trip.

Brașov is in central Romania, in the Carpathian mountain range – about 400km by road from Veliko Tarnovo (Велико Търново), Bulgaria. Turning off the main highway, following the signs for Brașov, we ride for 10km along a straight road continuously lined with communist-ear tower blocks. The city centre is wedged against the mountains so that the suburbs could only sprawl out in one direction. The “old town” centre is signposted, but you have to drive through all the suburbs, making you think you’ve missed it because “the town can’t be this big”.

The city has what appears to be a well established tourist industry. The mountainous location brings respite from the extreme heat experienced around Bucharest.

Nearby is the famed Transfăgărășan pass, 90km in length and up to an altitude of just over 2,000m. The road was built at the orders of the crazy dictator Ceaușescu for strategic military purposes.

The Transfăgărășan pass cuts over the Carpathian mountains, one of Europe’s large mountain ranges. It divides Transylvania from the rest of Romania. Driving from Brașov, the road is parallel to the mountain range. We ride along the large open plain, stretching out to the right, and the wall of the mountains in the horizon to our left. Soon we turn off the main road, and ride straight towards the mountain range.

Numerous hairpin bends, motorbikes, slow moving cars and a solitary caravan ascend the pass. The cars are easily passed and the caravan in a rarely seen display of courtesy, kindly pulls over for us.

For almost the entire 90km there is no sign of habitation, not a village in sight.

Reaching the highest point of the pass, we pause on the edge for photos and chat with a Serbian Outlaw biker. There is the obligatory shops selling knick-knacks and coffee.

A Polish biker follows us down the pass heading south. He has spent the previous 7 weeks riding around the Black Sea and appears quite concerned that his bike might struggle to make the trip back home. Carrying a spare tyre on the rear, he is far more prepared than ourselves.

For our final night in Romania, we pull up in Motel Dracula a couple of kilometres from Sibiu. Using only gestures, we book a room for one night and arrange to park the bikes behind a big gate in amoungst their dogs.

A short taxi ride has us in the middle of Sibiu for dinner time. Like Brașov, it is quite attractive with plenty of restaurants and bars, and we are well fed at a local steakhouse.

The next day’s plan is to make considerable progress back to Budapest, which is why we’re staying in a motel on the city outskirts. There’s a nice new EU-funded road a couple of hundred metres from our motel, which bypasses Sibiu and heads towards Arad in the west.

Like Bulgaria and Ireland a few years earlier, Romania appears to be making use of EU development funds. There are many new roads being built and existing ones being maintained and widened. However some sections are still in development.

We travelled across Romania mostly on secondary roads. There were considerably more trucks and lorries than in other countries. But otherwise the countryside was lightly populated, and we made decent time on most of the roads.

After several hours riding we arrive at the border between Romania and Hungary. This is the border into the Schengen area of Europe which allows unrestricted travel between member countries.

The line of trucks waiting to cross into Hungary is about 4km long. It suddenly becomes obvious why Overlanders shipped the bikes to Budapest and not Bucharest which would have been a far more convenient starting point. Following the cars in front, we put on our left indicators and overtake the long line of lorries.

It was as easy as arriving into Ireland on a previous trip away, where the Guard only checked our skin colour.