After 11 years and having toured through 29 countries, the Honda Transalp 700V, the first bike I bought new, has been sold and is on the way to a new life in Poland. I could not resist one final short tour into the Black Forest, and to take some video shots with the drone. A
Read More 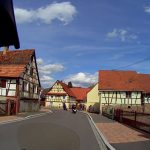 We head across the Rhine from Karlsruhe and into Pfalz, where we soon leave the motorway and head south to France. We cross the border in the small town of Scheibenhardt which is split between the two countries, where we immediately head east, following the border on the French side until we hit the town
Read More