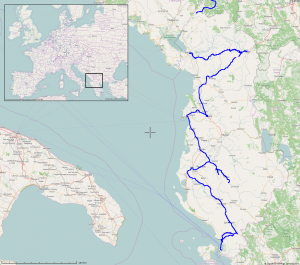 The road (E022/SH4) out of Greece towards Albania is large, deserted and unsignposted. Neither Albania nor any of the major cities that are reached along the main road are sign-posted. Thankfully we were using the Satnav.

Successfully across the border after the usual inspection of passports, registration documents and green cards, we’re heading for the UNESCO City of Gjirokastër. Despite rumours of abysmal roads, the major highways are in good condition and the numerous police checkpoints don’t care about our speed. As for the driving quality itself, it’s no worse than that which was encountered to the south in Greece.

Gjirokastër is one of two UNESCO cities in Albania. The old town area, whose present architecture is from the era of Ottoman occupation, is an active group of narrow cobbled streets and alleyways which include a few museums, one in the birthplace of Albania’s former stalinist dictator, Enver Hoxha.

A short climb above the old town is the Castle. Previously used by both King Zog and Hoxha as a prison for political undesirables, it is now a museum. Within the castle grounds is the wreckage of an unmarked, supposedly US spy-plane from the 1950s. Underneath the castle and open to the street, is a nuclear bunker – bring a torch.

We’re parked up in Gjirokastër for three nights, using it as an interesting base from which to explore the area. The woman in whose B&B we’re staying, doesn’t speak a word of English. Communication is challenging but not impossible.

Heading through the centre of the old town off to explore the Roman remains in Butrint, we immediately encounter problems. The police have closed off the streets and a local suggests we turn up towards the castle. Our Satnav soon recalculates a route and we begin an adventure through the steep and extremely narrow alleyways of the city.

Once finally out of Gjirokastër, the route to Butrint takes us along an unpaved mountain road, where the only other traffic we passed was a formerly German registered Mercedes (it still had the ‘D’ sticker on the bumper) and a man with a donkey.

As we approach the coast, we return to tarmac roads and ride through the upcoming tourist resort of Sarandë. I would imagine it’s like a budget version of Benidorm.

Butrint itself is right on the Adriatic coast and only a few kilometres from the Greek border. The ruins are significant and extensive. It is a site of UNESCO World Heritage status and one of the best examples of large roman cities in the balkans – many others have been destroyed or badly damaged (including Butrint) by earthquakes.

In keeping with our usual planning and scheduling, we take one in seven days off from the bikes. We do our best to pick somewhere interesting with a few amenities for the visitors. Gjirokastër was well suited, with a small but active tourist industry.

North from Gjirokastër our next destination is Albania’s other UNESCO city, Berat. The most direct route arrives into the city from the south on SH74. The final 60km is a single-track unpaved road. Playing it safe, we took the slightly longer but quicker asphalt route, arriving at our destination by lunchtime. After lunch we ventured south on the bikes, onto SH74 – at an average speed of 20km/h.

On the steep hill above the old town of Berat, is the citadel. Inside its walls are dozens of still occupied homes (maybe hovels would be a more accurate description). Families living in the castle grounds, just like they would have done centuries ago all across Europe.

Take care investigating the Citadel’s giant cistern. Health and safety regulations in Albania are still somewhat behind the rest of Europe. There are no barriers, warnings or other impediments to prevent you from casually strolling into the huge vat of water.

Our hotel is quiet, there are only two other guests – a couple of middle-aged women from England who have an interest in exploring slightly more alternative destinations. The receptionist seems quite happy to use up the rest of her shift chatting with us, and recommends a scenic route to the south-east on SH72.

South-east takes us through the communist-era part of the city. Grim!

Turning back in a northward direction, we ride for the capital Tirana/Tiranë. Usually we avoid the big cities on bike tours, as they’re often not much fun to travel around on the laden motorbikes, but Tiranë seemed interesting and slightly different.

Thirty years ago Albania had few cars, only communist party officials were permitted to own one. Since then it seems that most of the country has acquired a car, usually a German Mercedes. Since the fall of communism, millions of new drivers have hit the roads with presumably no infrastructure in place for driver training or testing. The British Foreign and Commonwealth Office have issued a travel warning about the quality of the driving.

Nowhere is the driving more aggressive and erratic than in and around central Tiranë. The trunk roads are large and multi-laned but without any lane markings. Traffic tends to work in a chaotic self-organising manner, but they’re not used to dealing with large motorbikes and a bit of self-assertion is required on our part.

Unable to filter through the traffic due to our pannier boxes, we find ourselves stuck in traffic just in front of one of the hotels that I had previously shortlisted. It’s a rather fancy four-star place, with secure underground parking, air conditioning and for a rather reasonable €70/night.

From here the rest of Tiranë’s city centre which includes Hoxha’s Pyramid and some bunkers for shooting invading troops or local protesters, can be explored on foot.

Our landlord from home, had recommended a road through the mountains in the north. Formerly the main highway between Kukës and Shkodra, it has been bypassed by the motorway between Tiranë and Prishtinë in Kosovo.

The new A1 motorway has a feature that I have never seen elsewhere in mainland Europe, a left turn! Our recommended road is left off the motorway. The signs indicate that you must pull into the overtaking lane, stop at the gap in the central reservation and check for on-coming traffic before turning across the opposite carriageway.

Not to be shy about undertaking crazy maneuvers on 120km/h sections of motorway, we ride on to Kukës for lunch at Hotel Amerika.

From Kukës we retrace our steps onto the motorway, taking the tiny turnoff onto the old road SH5. Around 150km through the mountains, where we see more old military bunkers than other vehicles.

We spend our final night in Albania a stones-throw from Montenegro, in Shkodra. Surprisingly busy and a cosmopolitan city centre – probably a benefit from the its close proximetry to its wealthier neighbour.

Our journey onwards to Montenegro is deliberately difficult. There are a couple of very easy to access border crossings, however we deviate and aim for the crossing located inland along SH20 – a 60km journey through the mountains of which the final 30km is a gravel track and quite an adventure.