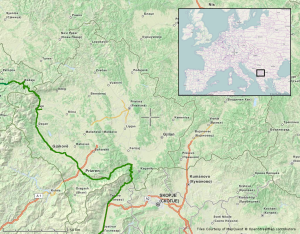 Ten kilometers after exiting Montenegro we arrive at the border crossing into Kosovo. There is a vacant gunner tower opposite the insurance office, likely due to recent violence at nearby crossing points. When we’re there the crossing is quiet and a pack of puppies are on hand to greet us.

Kosovo declared independence from Serbia in 2008, which has yet to be officially recognised by all EU states. It would also appear that the precise locations of the borders has still not been fully agreed.

The crossing is at an altitude of 1700m up in the mountains which separate northern Kosovo from Montenegro and Serbia. Kosovo is not yet in the European Green Card scheme, we must pay €15 each for 3rd party insurance before being allowed into the country.

From the border crossing it’s a rapid decent on good quality tarmac with many switchbacks and a few dead stray dogs, down onto the hot central plain that makes up most of Kosovo. The country is mostly flat but is enclosed on its northern, western and southern sides by mountains, proper mountains.

The first major town we arrive at is Pejë (Peć) where we acquire petrol and ride on for a bit, still unsure whether to head towards Albania or Macedonia. On to Prizren in the south-western corner of the country and well placed for a short hop into either of the next two destinations.

Arriving into Prizren, I spot a sign strapped to a lamppost advertising a hostel. Over the radio I instruct Rory who is leading, to make a right turn over the river and into the narrow streets of the city centre.

Along one of the small streets is the hostel, where we pull up on the side of the road – an advantage of being on motorbikes. The guy running City Hostel in Prizren is extremely helpful, friendly and speaks perfect English. He sorts us out with secure parking, in the locked compound of a nearby car wash – our own fully comp/fire & theft insurance is not valid here, security is important. The car wash manager didn’t speak any English, but we were able to get by with some German.

A short walk gets us into the central district of Prizren beside the river where most of the cafés and restaurants are located. For a country emerging from one of Europe’s most recent wars, these are suprisingly numerous. We position ourselves strategically on a table outside one of the pizzerias, so as to avoid the attention of the many roaming beggars.

Food is soon followed by beer at one of the local bar cafés. Drinking the local beer brewed in this muslim majority country, we relax as the nearby Mosque announces today’s final call to prayer. This haram feeling is reminiscent of a rebelious youth.

The following morning we decide to head for Ohrid in Macedonia. Taking the small backroad out of Prizren into the nearby national park.

We are aiming for the nearest border crossing. Due to the large mountain in the way, we must ride over 50km directly east before we can cross to the other side [see map above]. We take the smaller border crossing on the 116/R1203 instead of the larger M-2/A4 crossing. It was more fun.

Also due to the large mountain in the way we end up riding along the side of a steep canyon on rural roads – see the video below. When it’s not rocky, the area is heavily forested. It’s very scenic, pleasant riding.

We were originally not planning on visiting Kosovo. Lonely Planet’s guide to the Western Balkans did not talk highly of the country. However I have been quite impressed, a highlight of the trip. The mountainous areas are fun to explore, everyone we met was very friendly and the place is not swarming with tourists – always a positive.

Kosovo was much more off the beaten track than elsewhere in the former Yugoslavia. For instance, homemade cars consisting of an old cart with a engine bolted onto the front, were a common sight on the road alongside modern BMWs.