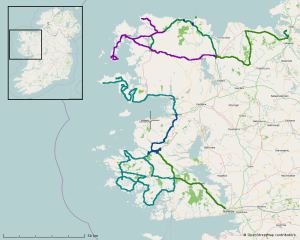 Connacht and more specifically the areas of Connemara in West Galway, Mayo and Sligo are rich in mountains, twisty rural roads and sheep – they’re everywhere, especially in the Connemara so be prepared to stop.

Centered around Clifden, the Connemara is a mixture of twisty coastal roads and long open sections in the bog-enriched valleys. Stick to the regional roads, any road number starting with a ‘R’ for the best and clearest rides.

Located just a few kilometres south of Clifden is the site of the first Transatlantic Telegraph Station run by Marconi, it is accessed by a 1½km gravel track, which is easily ridden [map]. This site is also where Alcock and Brown landed the first transatlantic flight in 1919 – choosing a bog probably made as less than ideal landing.

Our hostel is just a few kilometres from Leenane, where there is not a lot. There is a café/restaurant but if you’re after breakfast the only option is the nearby hotel who offer an expensive but mediocre start to the day.

North of Leenane and immediately off the national roads. We are following some cycle routes along tiny little regional (R335) and local (L1824) roads – over rocky terrain and far more interesting than the main route to Westport.

An alternative route would go passed Ireland’s most Holy Hill, Croagh Patrick. Religious enthusiasts walk up the hill barefoot, doing their best not to enjoy the experience.

After Westport it is on to Achill Island. The coastal road along the southern edge passes by one of Gráinne O’Malley’s (Grace O’Malley aka the Pirate Queen) castles. Near Slievemore are the remains of a village deserted at the time of the famine in the 1840s. [map]

Between Achill and Bangor near the north coast of Mayo, are bogs and a single big straight road.

In the extreme north-west there is the bleakness of Belmullet. There is not a lot to see here, often windy and one of the wetest places in the country.

Back along the coast near Ballycastle is one impressive site of prehistoric activity in Ireland. The Céide Fields are the remains of 5,000 year old agriculture. A large field structure from the stone age that has been preserved underneath the bog – the peat bog grew on top of the fields.

The site was only discovered when locals who were digging into the bog to use it as fuel, found rocks piled in the formation of walls.

The visitors centre is right next to the main road and the tour takes around one hour. [map]

From Ballycastle, straight through Ballina – there is no reason to stop here, not even their Supermacs opens for breakfast at the weekend. Heading into County Sligo, to the seemingly empty area immediately to the east of Ballina. Here instead of bogs are hilly wooded lands with the odd lake.

Passed the sign pointing to a mass rock, we stop for a bite to eat alongside Easky Lough – the final scene in the video below.

A few kilometres to the south-west of Sligo Town is Carrowmore Megalithic Cemetery. Another site from the stone age, probably around 5,000 years old. The fields are dotted with dolmens and largely undistrubed stone circles.

Local folklore prevented much damage. It would be bad luck to go messing with the stone circles.