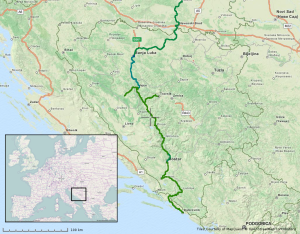 Our first mistake was to enter the Bosnia on a Sunday afternoon without a Green Card. We crossed the border at Brod/Брод in the north, where the guard took our passports, looked at our registration documents and told us that the office to buy insurance was closed.

After standing around for about 20 minutes we finally spoke with another guard who asked if we had a mobile phone and then took us to the office. A little bit later and we had local 3rd party insurance for €36 each, and were finally allowed to enter Bosnia and Herzegovina.

Before arriving in Bosnia the temperature had been in the mid-30s°C but as we headed from the arid lands after Brod and into more mountainous terrain the fork-lightening appeared accompanied with the usual heavy blinding rain. Along with all the other motorists, we pulled over into a powerless petrol station where the owner kindly offered Rory a dry t-shirt (he had been riding without the waterproof lining).

10km away was Banja Luka/Бања Лука which was also experiencing the first rains of the summer. The roads in the city are badly rutted, months worth of oil mixes with the rain water into a slippery soapy solution and it’s getting dark. Things get hairy when I almost almost lose control trying to turn off the main road.

We find a hotel in the city centre with underground parking. The rain has stopped, Bosnian money acquired from an ATM and a pizzeria is found. There didn’t seem to be many restaurants, but lots of bars. A beer is needed, there are dozens of bar cafés in the city – we choose to drink in Cafe Bar Hertz, where the barman tells us that he knows just one person from Ireland. Jokingly, we asked who it was, since Irish people joke about how everyone in Ireland knows each other. The person he knows is the guy who transported our bikes to Budapest. Small world.

The barman from Cafe Bar Hertz, Dragan, a biker himself, suggested we head south – the main road goes along a canyon, through several tunnels after which we turn off at Jajce. The former seat of the Bosnian Kingdom and where Josip Tito founded the anti-fascist council during World War II. Now it’s a lovely little town. There aren’t a lot of tourist amenities here, but it’s nice. There are waterfalls here.

25km from Jajce along small country roads is the source Pliva river, another recommended place to visit. Rory leads us to the source, and when the road stops he keeps on riding up the stoney mountain track. 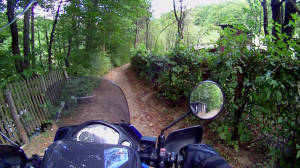 Coming back down the track Rory’s front tyre skids and his bike falls on its left side. Rory is fine, but the gear stick is severly bent. He rides the rest of the track in 1st gear, and then fixes the bike in 3rd for the ride back to Jajce. The 650cc engine is quite happy to pull away in 3rd on the flat and will cruise along at a steady 70km/h. The ride back into town is easy enough.

With the help of our hotel receptionist, a local mechanic is found. We got to use our picture book to explain that we need a mechanic, the receptionist’s English would not have been good enough, but a photo of a mechanic fixing a car is universal! Rory’s gear stick used to be identical to mine – the mechanic removes both gear levers and drives off to his workshop to bend Rory’s one back into shape. The guy speaks no English or German, but communication is easy enough, show him the bent lever and he know. 1½ hours later and both bikes are back in full working order.

The next day we attempt a rural route, but our lack of a SatNav is a hinderance, since we can’t figure out where to go. We do at least get to explore an unusual water feature in the Jajce area.

Next it’s off to Mostar and the country is on fire. As we ride along the canyon, we can see the large volumes of smoke rising from the forest above us. It’s no coincidence that as we head south it is getting much hotter. The road into Mostar (M17/M16) is wonderful. It follows the wide river along the canyon, little to no towns along the way, nice wide road with sweeping bends and great wooded scenery. It’s a major road, so there can be traffic.

By early afternoon we have made it to Mostar, found and parked up in the old town without too much difficulty. Accommodation soon sorted and showers immediately taken.

Mostar seems to benefit from the overspill of tourists visiting the Croatian coast and Dubrovnik. The old town area is packed with tourists, everyone accepts Euro and there are plenty of places to get an ice cream. There’s lots of tourist shops, restaurants, bars and hotels. 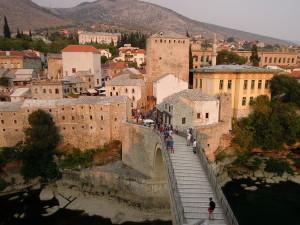 The next day our route takes us out of Bosnia and into Croatia, on the back roads. As soon as we leave Mostar the landscape becomes quite arid with only the few occassional buildings – some still bearing war damage.

The roads are small, mostly straight and traffic is virtually non-existant. We can at least maintain a suitable pace to keep ourselves cool.

Some national borders grew along mountain ridges. This border between Bosnia and Croatia seems to have formed around an almost uninhabital area of semi-desert. There do however appear to be a few Croatian flags flying in this part of Bosnia to the south-west of Mostar.