Albania features two cities which have been awarded UNESCO World Heritage status, Gjirokastër and Berat. Both are located in southern Albania and it would be highly recommended to include them in any tour of the country.
Read More

Albania, previously closed off and still very different to the rest of Europe. It's one of the poorest countries in Europe, depending on how far east ones definition of Europe extends. Consequently its infrastructure still has a lot to be desired. This low quality infrastructure includes hundreds of kilometres of unpaved roads. These are sometimes primary
Read More 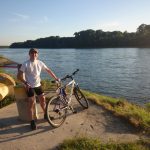 Our own physical state is pretty critical too. Spending several hours per day for two or three weeks sat on the bike on often challenging roads, can be exhausting. Maybe less so for people who already spend a couple of hours everyday on their bike commuting, but I am a mere recreational user these days.
Read More 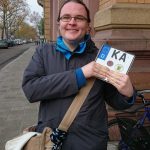 We have moved and taken our bikes with us. We are now living in Baden-Württemberg, Germany where we are a couple of hours from the Alps and have the Black Forest on our doorstep.
Read More

Crossing over one of Europe's great rivers, the Danube, we enter into Romania just south of Bucharest. The Danube runs along the border between Bulgaria and Romania, and we will revisit this river further upstream when we return to Budapest.
Read More